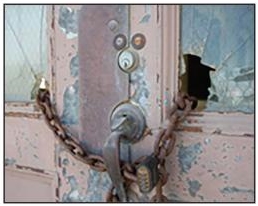 (This article originally appeared at the Wisconsin Christian News.)

Would a mind like the picture on this page, shackled and padlocked, really work very well?

Why do I mention this to you? Because it matters — it can be the key to everyone.

Speaking of great minds and intellect, the renowned and late Stephen Hawking was a physicist and researcher who also became a philosopher and was considered by many to be a genius.

Let me start by saying, this is a free society. You are a free and sovereign human being. You have free will to think and feel and do what you want to do, so long as it harms or endangers no one else.

Given this fact, I would like to express my personal opinion of Stephen Hawking and his entourage and disciples.

Frequently, when someone who has power and influence because of money or fame or even intellectual abilities makes a statement, the all-too-willing lemmings and sheep gather around them and elevate their beliefs, theories and conjecturing into universal laws bordering on a new religion.

Those who see through this facade, instead of being thanked and acknowledged for shining the light of truth and clarity on the subject, are then often themselves the new targets of derision, of attack – not because they are wrong (they’re not) – but because they upset the status quo of non-thinking people who bow and give homage to the one spewing false principles and false doctrines.

So it is, in my humble opinion, with Mr. Stephen Hawking. He and his followers desperately needed, not just wanted, but needed the rest of us to throw away our questions, our principles, our knowledge and experiences, our values, and simply accept his “pseudo-science.”

Well, not me, and I hope not you. I am more than disgusted and worn out with all the media hype about the late Mr. Hawking’s brilliance and absolute knowledge of the future events of humanity’s development and evolution.

God is for real, man!

The most core, central, critical of all basis upon which to ground such sweeping predictions as he routinely made, is a deep and abiding connection to God who created this universe.

Lacking that, anything and everything he would propose is utterly meaningless, and worse, can be spun to produce confusion, dis-empowerment of the individual’s right to question, to disagree, to express dissent, to challenge.

God grants us intelligence and free will – Hawking and his ilk wanted us to have neither because it revealed their utter lack of truth, wisdom, insight or humility.

Science is not God, rather God invented science.

Scientists and theoreticians are not God, they are human beings created by God. They may question, they may postulate, they may dissent, which is their right, but when you carefully deconstruct their theories and their arguments, you discover their most feared thing:  you know they are wrong, and their theories are junk.

Disconnected from God means connected to nothing, or worse yet, to be an arrogant but ignorant follower of Lucifer.

Science is a view of creation

I have been blessed to have dedicated my life to studying science and I have the utmost respect for it, but it is subordinate to God. God created it, therefore it is not greater than God any more than Lucifer is greater than God whose authority he sought to usurp using the very freedoms which God had granted to all creation.

Being a doctor is a humbling gift, and the knowledge of science is another facet of God’s Grace, but keep the horse before the cart or your travels will be backwards and your destination of truth will never be realized.

You and I were given a beautiful gift of life and part of that is to develop into the unique human beings we can become. Learning, thinking, exploring all parts of finding out who we are, who we can become and what we can discover.

I’m writing this because even still, in the 21st century, there are people who are incredibly close-minded, prejudiced, biased, not searching for the truth, but only looking for an opportunity to vent their bogus, inaccurate, illogical opinions to convince themselves and you of theories and ideas which are silly, wrong, misleading and counter-productive.

In my work in both the medical and the political fields, I encounter such individuals all too often. Their philosophy is: “DON’T CONFUSE ME WITH THE FACTS . . . MY MIND IS ALREADY MADE UP ”!

I am not exaggerating, this has happened literally more times than I can count.

Seeking Truth In a World of Lies

A fellow medical colleague recently had a fit when a patient he treated got worse, then came to my clinic, had a full recovery, and instead of celebrating the healing or at least asking me how this worked, my colleague got extremely upset to the point where all he could do was gasp for breath and utter a string of 4 letter words incoherently.

He was not searching for the truth, his mind was made up no matter what — and no one could convince him of anything different.

God bless him, it’s his right to remain ignorant, but it is NOT his right to inflict his insanity on anyone else and try to influence them away from the real truth and into the chaos of his own mind.

There is an incredibly rich, compelling history of alternative medicine, herbal medicine and homeopathic medicine. You just need to know where to find the research. I studied medicine in Germany, the research is there, I can show it to you.

Knowledge is power — we want you to be smart, well informed, empowered with accurate scientific knowledge because that gives you insight, understanding and freedom to make your life and health better.

So the next time someone says to you there is “nothing” in alternative medicine, consider the source, offer to enlighten them, and if they blow you off just realize they are not ready for the real truth but you are and you can move forward in your life without their permission.

Want more information? We have it, contact us! We are teachers as well as practitioners and your health is too precious to jeopardize for lack of knowledge.